July 2015 was a month without much nail art. I was working at LEGOLAND where my nail polish wasn’t allowed to be too noticeable, and even if I wore discreet polish, it would chip off within the first hour of work, so I quickly dropped that idea and let my nails be naked.

However, I couldn’t be working at LEGOLAND without honoring LEGO just a little bit, so I made these Star Wars nails since I was working at the Star Wars shop, and I made these LEGO brick nails. I wanted to recreate them this year for four reasons. 1) They were awesome 2) My nails have a more brick-like shape now that they are sqaure(ish) instead of oval 3) Last year I did them in pastel colors, and this year I wanted to make them more true to reality 4) I thought I could make it look a little neater.

I also recreated the video for these ones because the quality of the camera I used last year was so terrible – if you’d rather see the pastel colored ones where I used acrylic paint instead of polish, you can find it here. 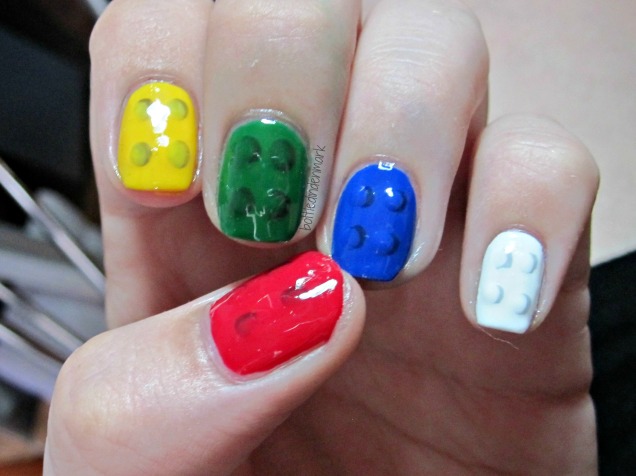 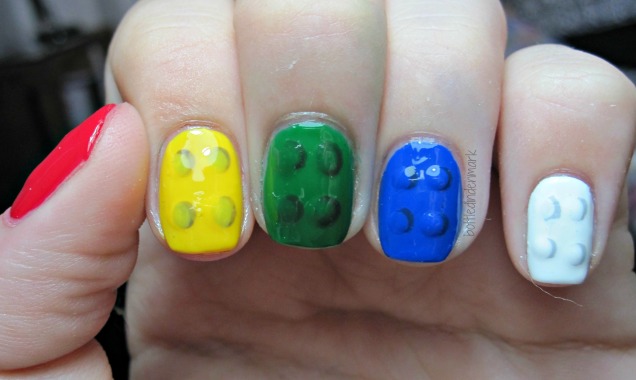 While I like this color scheme better than the pastel one in terms of making the nails look as close to real bricks as possible, it was harder to see (and photograph) the dots so you’d be able to see that they were supposed to be bricks. The light kept hitting the top coat – damn you, too shiny top coat (Just kidding, I love you). The pastel colors showed that more easily. However, that being said, I’d like to call this recreation a success – the nails and pictures/videos are much better looking! Don’t you agree?