Since the end of the challenge, I’ve needed a break from blogging, and to be honest, that feeling hasn’t quite passed yet, so I’m not sure how often I will be posting over the next few weeks – that depends on how much I feel like it. I want to create good content for the blog, and that just doesn’t happen when it feels obligatory, so I hope you’ll bear with me, if sometimes my blogging schedule becomes a little sparse. I actually have a schedule planned out in my head, but since you don’t always know what life throws at you, I’m just going to keep it in my head so I won’t disappoint anyone if I stray from it.

After the shift in the weather I’ve been searching through my closet for warmer clothes, and as it turns out, I don’t have that much pretty AND warm clothes. Either it’s pretty, summer clothes or warm, comfortable clothes. I had my mom with me on a shopping trip looking for new, warm clothes that is a bit more mature and pretty than all of my comfy sweaters (which I still love, by the way).

END_OF_DOCUMENT_TOKEN_TO_BE_REPLACED

Today, we had to go into the city to buy a present for my boyfriend’s father’s 60th birthday and we had no ideas as to what we were going to buy for him, so we had to take the full tour of the shopping street – meaning stumbling upon a few temptations, some of which we couldn’t walk by however hard we tried.

We got these two mason jars which we were going to use for spaghetti – turns out the tall one isn’t tall enough for the spaghetti, so we’ll have to decide if we don’t mind them sticking up a little or if we want to do something else with it. The smaller one is still going to hold pasta.

A new shop had opened, a tiny shop with what I like to call hippie-hardware – one-of-a-kind items that aren’t mass-produced – or with a look that is meant to fool you into thinking that. Nonetheless, these kind of shops have popped out everywhere lately, and I really like them. Anyways, this new one (where we also bought the mason jars) had these cute little plastic water bottles that we had to have.

Lastly, I couldn’t walk past the rack outside the book shop that had a 3 for 10 £ sale. I haven’t heard of any of the books, but they appear to be part of – or closely related to – the chick-lit genre, which is always a hit with me.

I’ve been looking for sneakers like these FOR-EVER! It is just not until now that I found the perfect ones at a reasonable price. These are from Intersport and were on sale for 599,95 kr. I have a pair in all black that I have to use for work, but I’ve wanted some with some color too for everyday use. 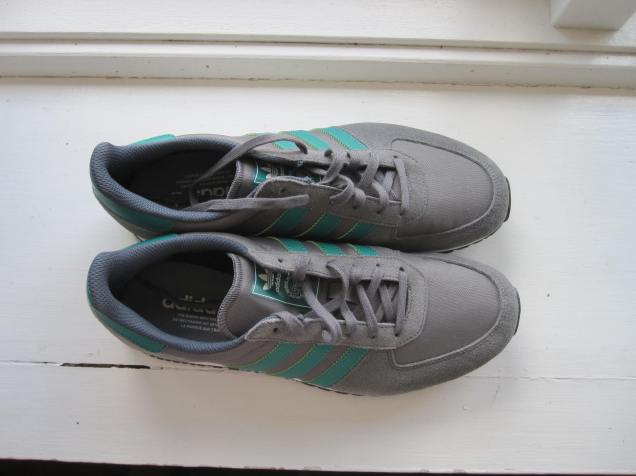 I especially like how sneakers compliment a dress/skirt and tights – more than I like how the look with jeans, I think. I don’t know if I’m jumping onboard the sneakers trend a little (too) late, but I still think they’re pretty awesome.

Yesterday, was the day of tax returns. Yesterday, I “accidentally” looked in my local drugstores catalogue. You do the math. I’ve been shopping again.